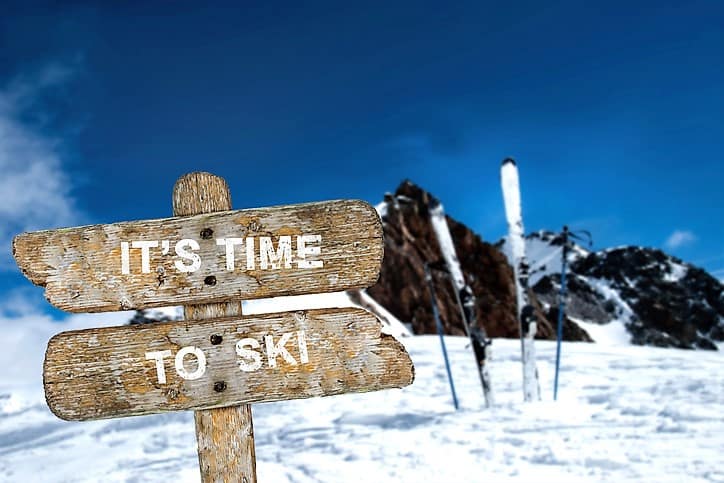 Are you ready for ski season? September in Colorado is when we notice changes that signal the coming of winter. Aspen change color and snow machines kick on overnight. Whether you are a skier, boarder or neither, our state’s history and love affair with skiing is an interesting story.

Traveling over snow on skis has a history of at least 5,000 years. While Colorado’s history with skiing isn’t that old (it became a state in 1861), it’s contribution to the sport is significant.

The first documented use of skis in Colorado was in the winter of 1859-60, in a camp near Breckenridge. Ten miners traveled down the valley using homemade skis. These early skis were 8 to 14 feet in length, and weighed about 25 pounds.

Skis soon became a dependable way for mail to get through when trains and wagons couldn’t – by 1880, there were more than 50 skiing mail carriers in the state.

In 1911, Carl Howelsen, a great Norwegian ski champion, skied down the western slope of Rollins Pass into Hot Sulphur Springs. He demonstrated ski-jumping to an awe-struck crowd during a winter carnival. A frenzy of ski interest and activity followed.

At the end of World War II, members of the Army’s 10th Mountain Division – who had come into being in July of 1943 to train soldiers at Camp Hale (near present day Vail) to survive and fight in the most severe winter conditions of the Alps – returned to Colorado. These men were in a large part responsible for the development of skiing into a big-name sport and popular Colorado vacation industry. They laid out ski hills, built ski lodges, designed ski lifts and improved ski equipment. They started ski magazines and opened ski schools. Vail and Aspen are a couple of the ski resorts built by 10th Mountain veterans.

Plan a trip to Vail for a visit to the Colorado Ski and Snowboard Museum, and learn more about the birth of this industry that put Colorado on the world map for great skiing.