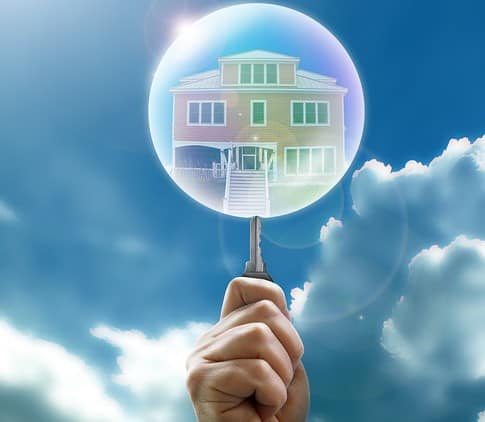 This post is part of an ongoing series, “ABC’s of Real Estate.” Stay tuned for more posts as I run through the a-z of real estate and provide helpful tips for home buyers and sellers alike.

We’ve all heard the term “housing bubble”. After all, the housing bubble in the mid-2000’s sent the United States into one of the worst economic recessions in history. So, it’s understandable that when people start talking about the possibility of a Denver-Front Range housing bubble, things get a little scary. Here’s everything you need to know about what a housing bubble is and whether or not we are in one.

What is a housing bubble?

A housing bubble occurs when factors like increased demand, unchecked speculation, and market excitement cause housing prices to surge and eventually become unsustainable. A housing bubble can last several years, but it is always temporary, and will eventually burst.

In the case of the recent US housing bubble, a sort of home ownership craze, coupled with low interest rates and very questionable lending practices created an unsustainable market. In fact, some 56 percent of home purchases were made by people who could not have afforded them under normal lending requirements. Mass mortgage defaults and millions of home foreclosures precipitated the resulting decline in housing values.

Is Denver in a housing bubble?

So, what about Denver’s current housing market? Our post-recession rebound has been in the news for years and it certainly has had some people worried about the possibility of a bubble bursting. While it is impossible to predict with absolute certainty, all data suggests no indications that the bottom is about to fall out on the market.

Take for instance that in the first quarter of 2018 there were 19,500 approved-by-lenders-buyers for 5,000 available homes. Looking at these numbers, housing demand would have to drop by a whopping 75% for the market to even come close to a balanced market, let alone a bursting bubble. The data supports that the Denver housing market is on trend for continued success.

So, what is the reason for the Denver housing market’s boom?

Several things. We have a solid economy where the unemployment rate is still below 3%. There’s also a lot of migration into the Denver-Metro area that’s fueling the demand for housing. This doesn’t seem to be slowing down either. People simply want to live here. Consumer confidence is also high, which means people are ready and willing to buy. All these ingredients create a recipe for a stable housing market.